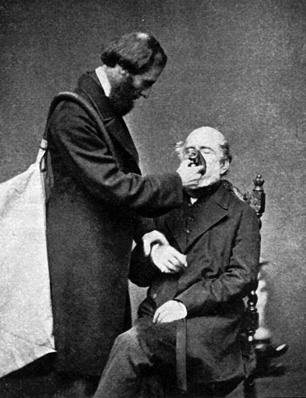 Chloroform was once commonly used as an anesthetic. In this photo from 1862, chloroform is being delivered to a patient.

Trihalomethanes are a group of similarly-structured chemical compounds that can form as a result of chlorine or chloramine reacting with natural organic matter in water. They're used in industry to manufacture further chemicals, refrigerants, pesticides and propellants. Chloroform, the most common THM, was at on time used in anesthetics, tooth polishes, balms and cough medicines.

THMs can arrive in drinking-water through industrial waste, but they are more common as by-products of water disinfection.

The formation of these chemicals during water treatment is dependent on several factors, including:

In general, according to the World Health Organization, smaller municipalities “with less sophisticated treatment systems had higher THM levels in their drinking-water.” Human exposure to THMs may also occurs through foods (especially dairy products), swimmming pools and hot tubs, and consumer products such as pens and housewares.

Exposure to trihalomethanes can have toxic effects on the central nervous system and heart, and prolonged exposure has been shown to affect the liver, kidney and thyroid. According to the EPA:

Some people who drink water containing total trihalomethanes in excess of the MCL over many years could experience liver, kidney, or central nervous system problems and increased risk of cancer.

Chloroform and bromodichloromethane have both been determined carcinogenic in animals, and are classified by the International Agency for Research on Cancer as being “possibly carcinogenic to humans.”

Trihalomehanes may be treated with a combination of air stripping and granular activated carbon. Reverse osmosis has also been shown to reduce levels of THMs.

Ideally, the formation of high levels of trihalomethanes will be prevented during water treatment by the reduction of THM precursors and regulation of pH.