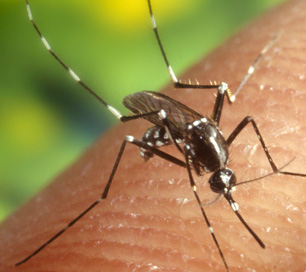 Temephos is used primarily to control mosquitos in non-potable waters.

Temephos is an insecticide primarily used as a larvicide to control mosquitoes in swamps, marshes, lakes, shallow ponds and other non-potable waters.

Human exposure is expected to be low due to its short half-life, but the World Health Organization reports that it may end up in drinking water when applied to water storage containers.

According to the EPA, temephos can affect the human nervous system by inhibiting cholinesterase, causing symptoms of dizziness, confusion and nausea, and potential respiratory paralysis or death with exposure to large amounts.

A prison study involving relatively high doses (from an earlier ethical era) shows that this may not always be a concern:

The World Health Organization reports that although there is no documented water treatment for temephos removal, it “should be removed by adsorption onto activated carbon and possibly removed during coagulation.”