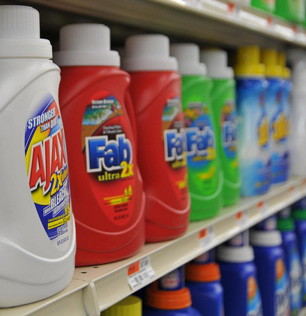 NTA can be found in some laundry detergents.

Nitrilotriacetic Acid (NTA) is a chemical used in laundry detergent, as a scale prevention method for boilers, in photography, leather tanning, in textile and paper manufacturing, and as a medical treatment for manganese poisoning. Its use in detergents was banned in the 1970s, but resumed in the 1980s to replace phosphates that were then being banned.

According to a 2011 report from the National Toxicology Program, “the general population may be exposed through ingestion of drinking water or dermal contact with products containing nitrilotriacetic acid or its salts.”

The EPA recommends activated carbon for the treatment of nitrilotriacetic acid.