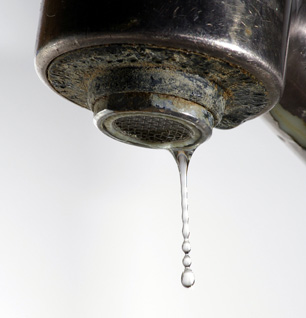 Hard water has caused calcification on this faucet.

The standard measurement of hardness in water is “grains per gallon,” with a grain representing 17.1 parts per million. Grains per gallon is usually reported “as calcium carbonate” (CaCO3) to facilitate comparison with other constituents of the water.

There are a variety of definitions of where “hard” water begins, but there is general agreement that water of 7 grains per gallon or more is hard enough that things would be improved by a water softener.

The standard treatment for hardness is a water softener. It can treat up to about 100 grains per gallon of hardness, although it's less effective when a large amount of sodium is present.

Reverse osmosis also removes hardness, but RO membranes are susceptible to scale. Municipalities use a process called “lime softening” which lowers but won't remove hardness completely. Other alternatives to conventional softening include sequestering with polyphosphates and electronic- or media-based treatments that do not remove hardness but condition it to be less objectionable.