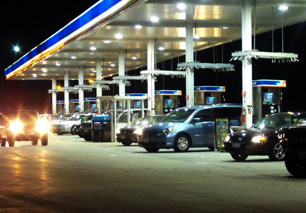 EDB was at one time a leaded fuel additive.

Ethylene Dibromide (also known as EDB, 1,2-Dibromoethane or 1,2-ethylene dibromide) is an organic chemical used as a lead scavenger, added to gasoline along with leaded anti-knocking agents. Because of modern regulations against leaded fuels in automobiles—and because of leaded fuel's incompatibility with catalytic converters—its fuel uses are now primarily in airplanes. It was also at one time used as a pesticide, but is now mostly used in the chemical industry as a solvent and intermediary.

The main entry-point of EDB to water is through waste water, emissions, spills and runoff.

Acute exposure can lead to a number of toxic effects, according to the EPA, including “damage to the liver, stomach, and adrenal glands, along with significant reproductive system toxicity, particularly the testes.” The agency also warns that it is a potential carcinogen and can lead to several long term health problems:

EDB has the potential to cause the following effects from a lifetime exposure at levels above the MCL [0.00005 milligrams per liter]: damage to the respiratory system, nervous system, liver, heart, and kidneys; cancer.

The EPA recommends granular activated carbon (GAC) for the treatment of ethylene dibromide.