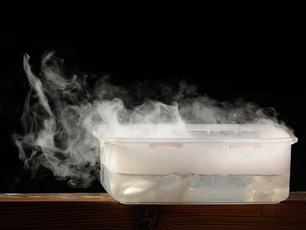 “Dry ice” is the solid form of carbon dioxide.

Carbon dioxide is a naturally occurring chemical compound that can be found in most air and natural waters. It's formed by volcanic activity, natural hot springs and geysers, fermentation during beer and winemaking, leavening agents in baked goods, and as a product of cellular respiration in animals.

It has uses in many industries. It's used to carbonate beverages, as an ingredient in chemical manufacturing, as a pressurized gas in pneumatic machines, in oil and extraction, as a refrigerant, and as a method of controlling pH in swimming pools.

Carbon dioxide is closely related to pH. PH decreases as carbon dioxide content increases and pH goes up as carbonate alkalinity goes up.

Carbon dioxide exists at pH levels between 3.6 and 8.4. It cannot be found in water with a pH of 8.5 or higher.

Carbon dioxide plays an essential role in human respiration, but excess amounts in some conditions can lead to health concerns. According to Lenntech,

The primary health dangers of carbon dioxide are:

Carbon dioxide can be easily dissipated by aeration. It can also be removed by deionization, or by raising the pH above 8.5 with Soda Ash injection.