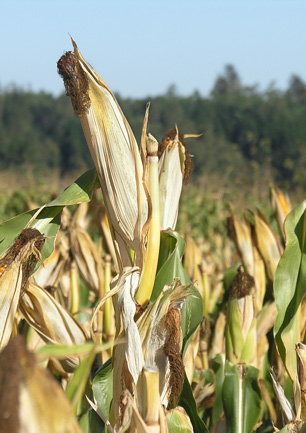 Ammonia is commonly used to fertilize corn and wheat crops.

Ammonia is a natural product of the decay of organic proteins. It's widely used in industry and agriculture, and an important chemical in plant, animal, and human biology.

Ammonia gets into water supplies most frequently as runoff in agricultural areas where it is applied as fertilizer and it easily finds its way into underground aquifers from animal feedlot runoff. Ammonia itself is not often found in well water because bacteria in the soil convert it to nitrates.

While large amounts can be hazardous and caustic, it is not currently regulated by drinking water standards.

Ammonia is difficult to remove from water. It can be removed by cation exchange resin in the hydrogen form, which requires use of acid as a regenerant. Degasification can also be effective. Neither of these methods is easily adapted to residential use.

Distillation is an effective treatment for drinking water. It can be also be destroyed chemically by chlorination, but the resulting product is chloramine, which is also difficult to deal with.

According to the WQA Technical Application Bulletin for Ammonia, it can be effectively and economically reduced in public and private water supplies by zeolite ion exchange regenerated with salt.