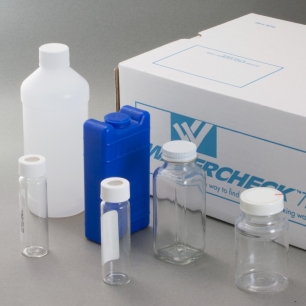 WaterCheck is National Test Lab's most popular test offering. The WaterCheck includes all of the main water treatment issues that apply both to wells and city water. It looks at 87 separate water issues, including bacteria (presence/absence for coliform and E.coli), heavy metals and minerals, inorganic chemicals, physical characteristics, trihalomethanes and volatile organic chemicals.

WaterCheck not only includes the most prevalent chemical contaminants of wells and city water supplies, but it also furnishes all the standard tests needed for treatment of common problems: pH, TDS (total dissolved solids), alkalinity, turbidity, hardness, iron, manganese. The WaterCheck package also includes a test for coliform bacteria, and, if coliform is found, a test for E. coli. There are also tests for arsenic, fluoride, lead, chromium and other poisons. (See Sample report for a complete list of contaminants and water characteristics that are tested. Note that MTBE, the gasoline additive that's been in the news, is included, as is chromium, also a contaminant that has received much public attention in recent years.)

We also offer an upgrade test called WaterCheck Deluxe with Pesticides that adds tests for additional pesticides, herbicides and PCB’s. This is a valuable option that you should consider if your water comes from a lake or pond or from a well in an agricultural region.