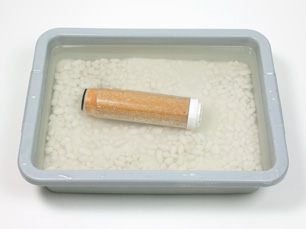 Here's our regeneration test performed in a high-tech plastic dishpan. (Test does not conform to NSF standards.)

The softening cartridge (part # : FC024) for our garden hose filter is filled with the same resin that's in a home water softener, and it's just as effective. But because of its small size, its lifespan is limited.

To test its endurance, we took a new cartridge and ran our moderately hard (7 grain per gallon) tap water through it and tested it after every ten gallons or so until it stopped softening the water. On our water, a new cartridge has about a 90 gallon capacity before it begins to “leak” hardness.

The good news, though, is that you can renew it through an easy, inexpensive process, and that it will last virtually forever.

The salty water (brine) will dislodge the calcium (hardness) buildup on the resin and replace it with sodium. It won't quite make the resin “as good as new” — not even a commercial water softener does that — but it will recharge the cartridge considerably, and you should be able to reuse it almost indefinitely.

You might consider buying a spare cartridge or two so that one can be recharged while another is in use.

The useful life between regenerations, of course, depends upon the hardness of your water.