A chloramine filter that removes chloramines with catalytic carbon (Jacobi Aquasorb or Centaur®) and an innovative tank design. 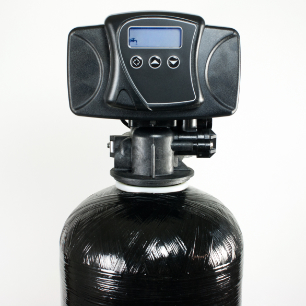 It's controlled by a Fleck 5600 SXT valve, which gives the user much more control over settings than a standard timer. 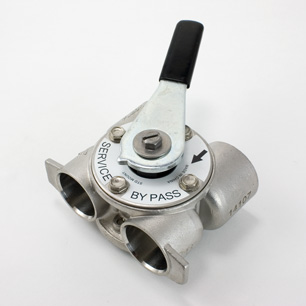 All units in this series come standard with a 1" or 3/4" stainless steel bypass valve (your choice). This makes installation and service a snap. The bypass lets you easily divert water around the filter when filtered water isn't needed (for lawn watering, for example).

A Veritable Black Hole for Chloramines

Chloramine removal is near the top of the requests we get from city water customers. People are concerned and sometimes confused about chloramines.

Most of us are familiar with chlorine. For most of the 20th century, chlorine was the disinfectant of choice for public water supplies. Now it is being rapidly replaced by a substance called chloramine, a mix of chlorine and ammonia. The decline in the use of chlorine began with the relatively recent discovery of a group unsavory and often carcinogenic spin-off chemicals called trihalomethanes (THMs) that are formed when chlorine combines with organic matter in water. To meet EPA standards for THMs, which once created are hard to remove, municipal suppliers are turning increasingly to disinfection with chloramines, which produce much lower levels of trihalomethanes.

As often happens in our imperfect world, however, the solution to the THM problem brought its own set of problems. For example, chloramine can be deadly to fish in aquariums and ponds and to patients on dialysis machines. For regular home use, water with chloramine presents aesthetic issues of bad taste, odor and skin irritation. And let's be frank: its long-term effect on health is largely unknown. Chlorine, after all, was added to water for decades before THMs were discovered.

For a variety of reasons, increasing numbers of people want chloramine out of the water they drink and bathe in.

One of the big myths about chloramine is that it can't be removed. Actually, it is removed with filter carbon (often called charcoal), the same filtering agent that very effectively removes chlorine. The difference is that chloramine is much harder to remove. Therefore, it takes more carbon and water must be given more residence time in the carbon. In other words, you need a considerably larger carbon bed and a significantly slower flow rate to remove chloramine with standard carbon.

The challenge of chloramine and other difficult contaminants has led to the production of a modified carbon called catalytic carbon. Catalytic carbon is a specially processed filter medium designed to greatly enhance carbon's natural ability to promote chemical changes in contaminants. Standard filter carbon reduces contaminants in two ways. It “adsorbs” chemicals by trapping and holding them, and to a smaller degree, it “chemisorbs” contaminants by changing them to something harmless. Chlorine, for example, can be “catalyzed” to harmless chloride.

Catalytic carbon retains conventional carbon's ability to adsorb contaminants but it also possesses greatly enhanced capacity to catalyze, to promote beneficial chemical reactions. It is by catalytic action that chloramine is reduced.

Catalytic bituminous-based carbon is the unchallenged best choice when it comes to chloramine removal.

A backwashing filter is a simple device. It consists of a large tank, called a mineral tank, which is partially filled with the filtering medium. The medium is selected to deal with the problem being addressed. Carbon, for example, in granular form, is used for many purposes: to remove chlorine, to improve taste and odor and color, or to remove a wide range of chemicals. Filter carbon is much the same in form and appearance as coffee grounds. The carbon sits on a gravel bed that provides support and promotes even flow of water through the carbon bed. Operation of the filter is controlled by an automatic control valve which periodically backwashes the carbon by reversing the flow of water in order to clean the tank of trapped particles and at the same time to resettle the carbon bed. Backwashing eliminates channels through the medium that form during service flow. The backwashing process repeats itself periodically. One backwash a week is usually enough for clean city water residential carbon filter applications.

For whole house chloramine removal, we've combined a generously sized bed of catalytic carbon (your choice of Jacobi Aquasorb or the Calgon Corporation's premium Centaur®), with the best delivery system possible. Our chloramine filter is controlled by a Fleck 5600 SXT control valve, giving the user much more control than a standard timer. We'll set it up before shipping, but you can change the settings easily if you want to customize it to your situation.

Our chloramine filter also features a very unique mineral tank. We use the patented Vortech™ tank. It is designed for superb performance, easy carbon replacement, water saving, and year after year of trouble-free performance. The great advantage of the Vortech tank is that it provides an inner mesh support for the carbon which greatly reduces the amount of water required for backwashing and eliminates the need for gravel underbedding. Getting rid of the gravel reduces the expense and hassle of servicing the unit. It promotes even flow through the bed for superb performance.

We offer this unique unit in four standard household sizes. In the chart below, you'll see that each has a gallon-per-minute flow rate listed. This does not mean that water won't flow faster through the filter. It means that you'll get optimal reduction of chloramine (and other chemicals) if you'll keep your flow rate within the stated service flow limit.

All filters in the following table feature:

More Whole House Filters — We offer cartridge and tank-style media models, reverse osmosis units, aeration systems, and water softeners that can be set up to treat many water issues.

Back to Main Product Index