“Which Pura model do I own?” Before buying replacement parts, take a moment to identify your unit. 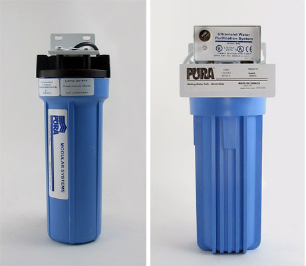 The UV1 uses a thinner housing body and the power adapter is located separate from the unit, similar to a power transformer for standard small appliances. The UVB units (which come in single, double, and triple housing styles) have a thicker housing and the power module (white box) is attached to the top of the white mounting bracket.

The units pictured are “Series 1” Pura units, UV1 on the left, UVB-1 on the right.

The whole house UV20 series and UVBB series are the most commonly mistaken units. Both use the #20 replacement lamp and both carry the marking 41Y4 on the front of the power module. The easy way to tell them apart is to measure the depth of the power control module (the white box on top of the mounting bracket). The UV20 module is 4.5" deep and the UVBB box is 6.5" deep. To avoid confusion, the UVB undersink unit described above uses the same power control box as the UV20 series. 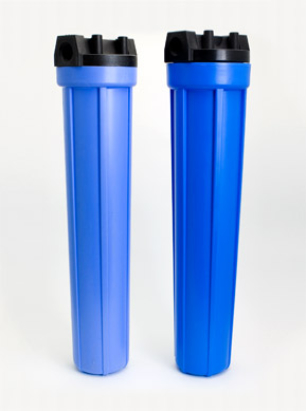 Pura changed housing styles in the last quarter of 2009, and again in January 2012. Each housing style requires different o-rings and housing parts (only some of which are still available). In an effort to lessen confusion when ordering parts, we have developed names for the three known housing styles:

Knowing the date the unit was purchased can be helpful in making an estimate of manufacturing date. In addition, below are some distinguishing features or Series 1 and Series 2 units.

The Series 1 UV1 unit is distinguished by the “USA-PPI” marking in the underside of the cap and by the lack of inlays in the upper lip of the sump (see images below). Series 2 UV1 units have no “USA-PPI” marking, but they have round inlays on the sump.

To distinguish between the Series 1 and Series 2 UV20 and UVB units, look inside the cap or at the top of the sump. In the pictures below, the Series 1 unit is on the left and the Series 2 is on the right.

The Series 1 and Series 2 UVBB sumps have different style o-ring grooves. The caps are distinguished by the number of tabs. Classic units are on the left and current on the right in the photos below.